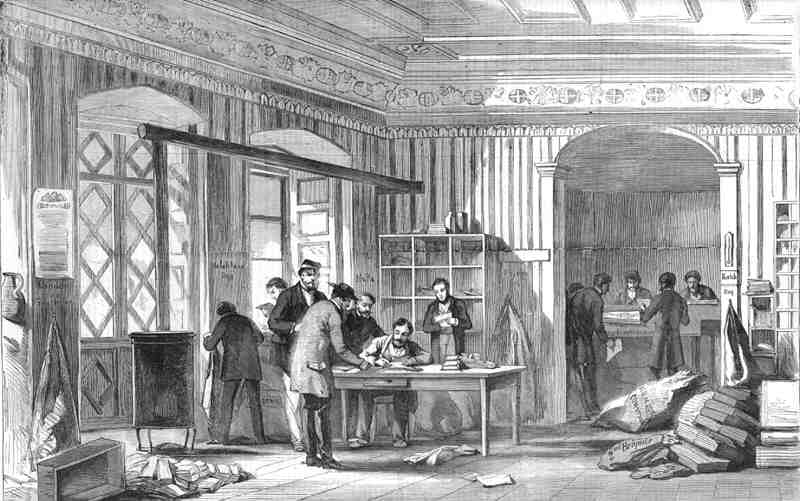 A print showing the British Army Post Office in Istanbul established during the Crimean War (1856).

In the Ottoman Empire there were post offices in various cities run by France between 1812 and 1923. France was one of nine countries that had negotiated "Capitulations" with the Ottomans, various extra-territorial rights in exchange for trade opportunities. In the case of mail, the countries' purpose was to facilitate communication between business interests at home and agents throughout the Middle East. The system came to end with the Treaty of Lausanne in 1923.

Originally, the post office used postage stamps of France, but these were denominated in centimes and francs instead of the local piasters, so beginning in 1885, some French stamps were surcharged in piasters, at a rate of four piasters to the franc.

Beginning in 1902, the Merson series was issued with the inscription "LEVANT", both as centime/franc, and with higher values surcharged in piasters. In 1905, 15c stamps in Beirut were surcharged with "1 Piastre / Beyrouth". Austrian Post Office was located inside the Jaffa Gate, Jerusalem

Austria and other European nations maintained an extensive system of post offices in the Ottoman Empire, typically motivated by the unreliable postal system of the Ottomans. For Austria, the practice started in 1748 with the establishment of a post office in Galata outside of Istanbul, and eventually extended to dozens of locations throughout the Balkans and the eastern Mediterranean.

The earliest mail service between St Petersburg and Constantinople consisted of diplomatic pouches carried from 1721 on. The Treaty of Küçük Kaynarca in 1774 provided for a regular mail service, for which a consular post office was established in Constantinople. It began using handstamped postal markings around 1830. Beginning in 1779 a mail boat circulated between Constantinople and Kherson, and 1781 saw the establishment of an overland route through Bucharest to Bratzlav.