This article was published by W. A. S. Westoby in the book "The Adhesive Postage-Stamps of Europe Vol. II" on pages 412-13. The book was published in London in the year 1900. 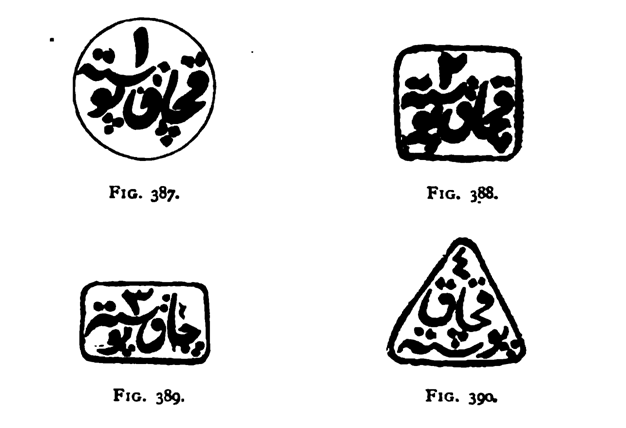 These are called Katchak, or contraband stamps, and the reason of their use is thus described. Male and female servants at Constantinople generally come from the provinces or the Greek islands of the Archipelago, and frequently bring letters for their friends. If these are discovered at the Custom House they are taken to the post-office, where double postage is charged on the letter, half of which goes to the detector, and the other half to the post-office. Stamps for the double rate are then affixed, and stamped with a hand-stamp of one of the above types, which reads "KATCHAK POSTA," denoting ''Smuggled Post." The first type belonged to the Constantinople Post-Office, and was used on smuggled letters from the interior only. It was withdrawn in 1877 and replaced by Type II., which was used till 1880, when Type I. was again brought into use.

Types III. and IV. were brought into use after Turkey had entered the Postal Union, and had opened a post- office at Galata. Type III. was intended for letters coming from the interior, and Type IV. for Postal Union letters, but the distinction has not been kept up.

The demand for these stamps by collectors has induced the officials to make them wholesale, and we therefore refrain from giving any list, especially as they are nothing more than cancelling marks. Unused copies on intact gum are common, which must have been made for collectors, for the stamps are affixed by the post-office, and cancelled with the Katchak hand-stamp without any further obliteration, so that to be certain that the stamp has been officially used it should be on the letter itself.

The stamps have always borne the impression of the hand-stamp in black or blue.