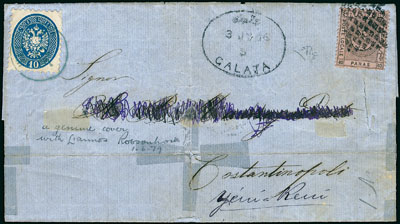 In early 1860, the postal service of the Ottoman Empire went through a dramatic reorganization to issue stamps and distribute the post. The speed of the reorganization had created distribution problems specifically in the areas where foreigners were living. The most important problem was the education of the postmen. The postmen of the Ottoman Empire did not have any problems reading or writing in Turish with the Arabic alphabet but they were having difficulty with addresses written in Latin alphabet. It would have not been fair to all the postmen to know multiple foreign languages and ability to read and write in Arabic and Latin. This situation forced the postal service to outsource the distribution of the post to a local Greek businessman Liannos. After completing all the paperwork in August of 1865 Liannos formed the local post distribution company “Liannos et Cie” to distribute the mail in Istanbul. The company signed a 6 year contract starting from December 1865.

During its existence Liannos distributed the post to the following regions:

Liannos continued to distribute the mail until it declared bankruptcy on March 31, 1867. From this date forward until 1870 the foreign post offices took over the distribution of the mail themselves.

Liannos was charging each piece of mail a price based on the distance from the city center. To manage these charges, they had issued three stamps with denominations of 5, 20 and 40 paras, printed by Perkins Bacon of London and issued in the autumn of 1865. These stamps are mostly perforated 14. There are also imperforated Liannos stamps but these have never been seen on cover. Even perforated stamps on cover are quite rare.

Liannos would attach these stamps on letters coming from foreign countries and charge the recipient for the postal fee. They also used an oval postmark on the letter with the word Liannos and the date they received the letter.

Beside these stamps, there are 4 piece service stamps. Though the printed quantity is unknown there are 3 separate prints and at least five types of forgeries. The second printing has thin paper and watermarked with the word “Podraca”. The 20 para stamps were printed a third time on a very thin paper without the dash between  “Taxe Ext.” and “Taxe Int.” words. The only recorded cover was in the possession of Dr. Adolf Passer.

Liannos was not only acting as a Local Postal service agent for the Turkish Government but also in a similar capacity for the Egyptian Post Office.

From a letter dated June 1866 from a well known philatelist in Constantinople D. E. MAVROGORDATO1,

The above now explains the wording on the stamp of which we are speaking. The “SERVICE MIXTE” indicated the combined Liannos--Egyptian P.O. Of the last three lines of inscription on these stamps the amount due to the Egyptian P.O., which was presumably paid first by Liannos on receiving the mail from the Egyptian P.O., was inserted after the words TAXE EXT. The Local Postage Delivery due was fixed according to weight by the values indicated of the four stamps described. The Total was then filled in.

The Liannos service was not able to pay its employees due to financial problems and in March 1867 the empoyees striked due to non-payment of wages, which as reported in the “Etoile d’Orient” brought about a forcible interruption of the service. The Liannos service had lasted little over a year and the Egyptian contract only some nine months.

On March 31st. in the evening, the Local Post had to close down, although notice of this was given in a more optimistic vein by the posting of Notices on the letter boxes which indicated that “the service is suspended until further orders”.

The Liannos service had other difficulties to contend with as not only did the Turkish Government not give it the encouragement and support which it undoubtedly deserved but did not even fulfill the letter of the contract it had made with Mr. Liannos in 1865 after the Sultan’s firman. It was this official neglect which largely led up to the strike and reports at the time show that the public felt they had been let down by the Government and not by Liannos who had served them well, although they felt a little aggravated that they did not receive one or two week’s notice of the sudden closure, as many were left with unusable stamps in their hands. At the same time the “Levant Herald” announced that it was proposed to sell the rights to run the Local Post at a fixed payment of 40,000 piastres per year, but this did not materialize.